The chapter draws its name from our county, Manatee, located just south of the beautiful Bay of Tampa. Manatee is also the name of the river that flows past our doors. The name Manatee appears to have come from the Cariban Indian language which referred to the sea cows or water mammals (manatees) that live in the river. The organizing regent was Mrs. Blanche W Henrickson. Other organizing officers were Aileen Botkins, Marie Craighead, Moreen Carlisle, Mary Harris, Margaret Brewster, Susan Fay, and Helen Taylor. The chapter was organized September 14, 1951.

This year Saramana SAR asked to join us for our third annual Genealogy Workshop. Finding new members is vital for both Saramana SAR and Manatee Chapter DAR.  Dick Mahaffey, Past President; Preston Adams, Treasurer and Doug Erb, Vice President joined 20 attendees for the event. Each attendee received s a packet with his/her identified Patriot, worksheets, reference materials along with the presentation so they could follow along with the program. During the two breaks Manatee Chapter Officers and members interacted with the attendees addressing questions and giving encouragement. 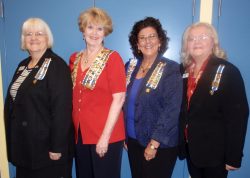 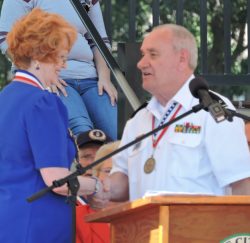 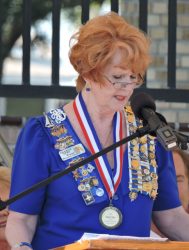 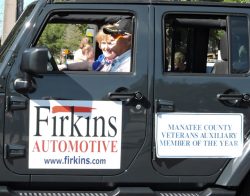 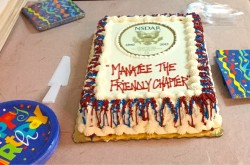 Throughout 2015, the Daughters of the American Revolution will be celebrating 125 years of service to America. The DAR was founded on October 11, 1890 to promote historic preservation, education and patriotism. This significant anniversary is an incredible opportunity to share DAR’s fascinating history as well as our organization’s contemporary relevance. We look forward to honoring the members who made the DAR what it is today and celebrating those who continue their work for the future.

Happy Endings and a Bright Vision for the Future!

Our Chapter celebrated the end of another great year with our Annual Luncheon Meeting and Installation of new Officers for 2015-2017 Terms.  This year’s event was held at the home of Sydney Shaurette with all in attendance contributing luscious salads and decadent desserts for us all to enjoy. We are all so looking forward to a relaxing summer and an exciting beginning of our meeting schedule in the fall. 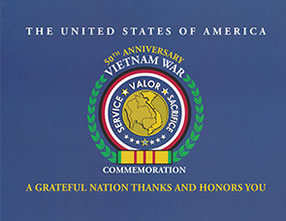 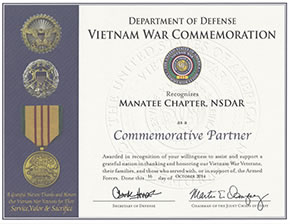 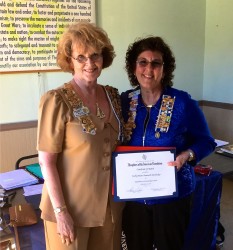 president of Sarasota Audubon,as applauding her abilities with the public as an Audubon ambassador in her written recommendation. 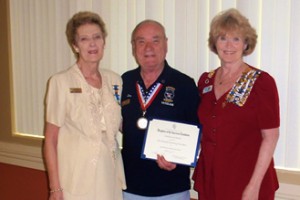 As stated by Regent Spry, “The National Society, Daughters of the American Revolution, encourages us to recognize those individuals who have made an outstanding contribution to the community. For Manatee Chapter, this was a no brainer! ”Several letters of recommendation were written in support of this award. Larry Bustle, County Commissioner stated “Manatee County citizens, and especially Manatee County veterans, owe Don Courtney a large debt of gratitude for his community involvement and his successful efforts to make Manatee County a better place for all and a community that is proud of the sacrifices of its veterans.” W. Brad Steube, Sheriff wrote, “I believe that Mr. Courtney’s record proves him to be an outstanding citizen and I hope you will find him worthy of an award from the Daughters of the American Revolution.” 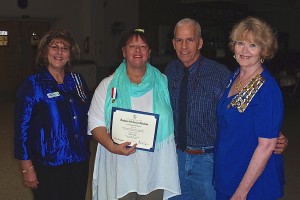 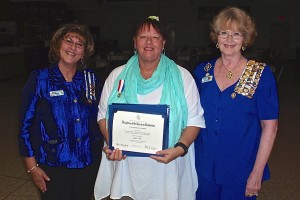 work together to preserve sea turtles and shorebirds. She also has worked with coastal residents and businesses on turtle-friendly lighting. As a result, there has been a dramatic decrease in hatch-ling disorientation achieved at seven different properties after converting to turtle-friendly lighting. Disorientations were reduced to zero at all sites. At the February 14, Manatee Chapter DAR meeting, chapter regent, Sharon Spry, and chapter member, Kathy Doddridge, presented Ms. Fox with the Conservation certificate and medal. In the audience were Manatee County Commissioner, John Chappie, Suzi’s sister, Nancy Banman, as well as chapter members and guests. 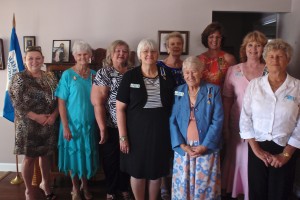 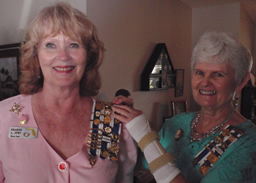 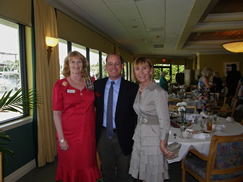 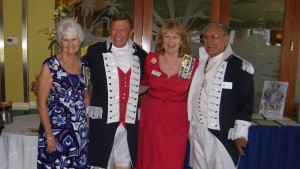 Manatee Chapter, National Society Daughters of the American Revolution (NSDAR) hosted the annual Constitution Week Luncheon at the Bradenton Yacht Club on Saturday, September 14, 2013. Attendees were members/guests of the five NSDAR chapters located in Sarasota and Manatee counties including: Allapatah, Myakka, Osceola, Sara De Soto and Manatee and the Saramana Sons of the American Revolution Chapter (SAR). Setting the tone for the day, the Saramana SAR Color Guard posted the colors followed by the pledge of allegiance along with a robust singing of the Star Spangled Banner. One of the highlights of the day was the vocal performance by Manatee Chapter’s Margaret Smelser singing “The American Anthem”. As anticipated, there were few dry eyes in the room! We were honored to have our own Manatee Chapter daughter, Linda Gallen introduce her son, County Commissioner Michael Gallen as our guest speaker. Having taught government at Lakewood Ranch High School and an attorney, Michael presented a very interesting overview of the origin of our Bill of Rights and the evolution of our Constitution as a living and breathing document. He provided clarity and insight into why the 14th Amendment is critical to the freedoms we as citizens are guaranteed.

Chapter projects reflect the objectives of our Society – Historical Preservation 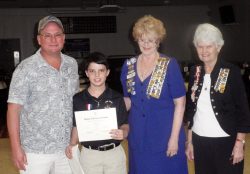 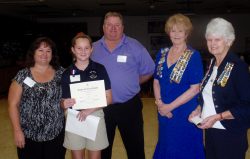 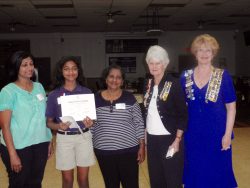 Cathy Slusser, Director of Historical Resources for the Clerk of the Court, Manatee County, was presented with the Women in History Award for her continuing excellence in preserving and promoting 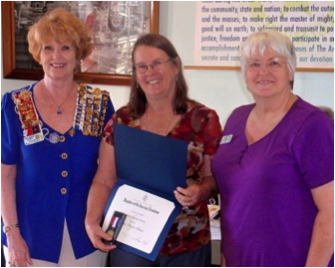 the vast historical resources of the county.

She is the author of the trilogy, From a Heavenly Land, based on the Atzeroth family of Terra Ceia.

Our chapter honored two of our own Manatee Daughters: Carolyn Chamberlain and Janet Entwistle, with the “Women in History Award.”

Our chapter supports the Manatee Historical Commission through donations for special projects, most recently the restoration of the park’s church steeple.

We organize genealogy seminars to assist all interested in tracing their lineage.

We assist DAR supported schools through donations of Box Tops for Education and Campbell’s UPC labels.

We sponsor awards for local children participating in the Manatee County History Fair.

Our chapter actively supports outstanding students in their pursuit of obtaining DAR Scholarships. We are generous financial supporters of all DAR Schools. 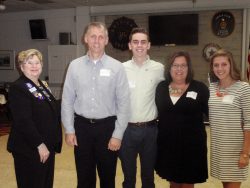 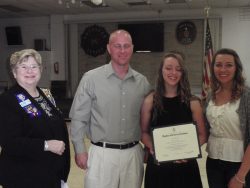 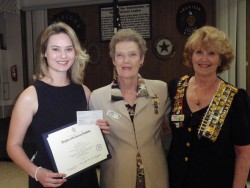 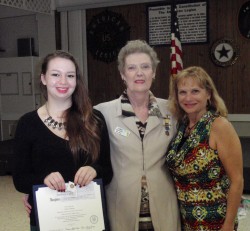 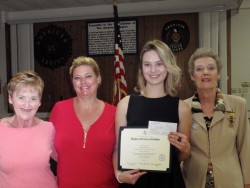 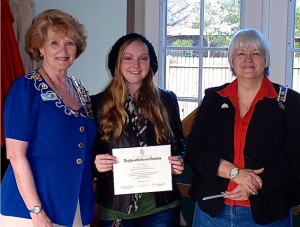 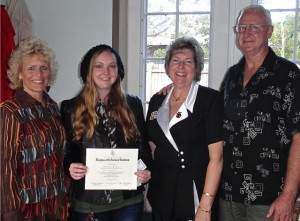 This student also placed third in the state competition. 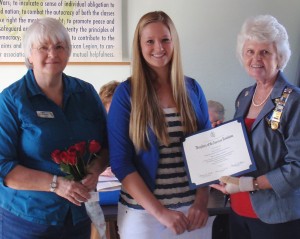 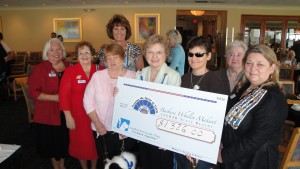 We provide entertainment for residents at the Douglas T. Jacobson State Veterans Home.

Chapter members are actively involved in the support of the Manatee County Veterans Council. 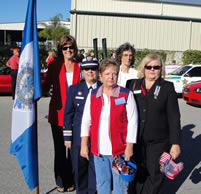 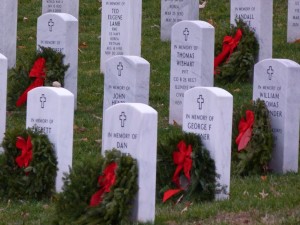 We generously support the efforts of the National Society’s DAR Project Patriot Committee.